Guess who’s back with another Danganronpa review?!

After all the testing that happened during the school year, I decided to sit down and finally watch the long gameplay for Danganronpa 2: Goodbye Despair. And what did I think of the game? I. LOVED. IT!! Now, I do not play or even watch video games on my free time, in that matter, but I was really engrossed into this game like I usually am with books. Since this was a continuation of the second game and series, I was a bit hesitant because I was a bit disappointed in the first series, like I said in a previous review. After watching the first chapter, I was hooked! From the characters to the executions, this game shines in all the right ways…but there was a flaw or two, just like in everything I watch or read. Now, let’s get started on the review!

Waking up from a coma, main protagonist Hajime Hinata wakes to find himself on a tropical island, and he has no idea how he ends up there. He tries to recollect his thoughts on how he might have ended up on the island, but he can’t remember a thing! Then, he meets a group of fifteen students who are in the situation as him, but there is a catch: these students from the school Hope’s Peak Academy know their talents, but not Hajime. After trying to figure out the mystery of the tropical island, they run into the evil stuffed bear, Monokuma, the teacher in charge of the trip. As the students demand for answers, Monokuma tells the class they have to murder each other and try to get away with it in order to graduate and leave the island. Just like in the first game and season, the students have class trials to try and figure out who the murderers are when the killings begin. Whoever murders a classmate gets executed by Monokuma himself, but in a brutal way. Join these students as they try to unveil the mysteries behind the murders and why Hope’s Peak Academy is even standing in Japan.

The premise of Danganronpa 2 feels like the first, but there is so much more to it than killing one another and figuring out class trials. These students try to find their true selves and regain their school memories by working together and overcoming the despair around them. And speaking of the characters, they are all so unique and memorable in their own way. They have their own quirks and insecurities, making them seem as if they are real people. In addition, they all get their own spotlights when Hajime, the main protagonist, asks them about their past lives. These characters have their own pasts that make them to who they are today. Some of them can relate to the players or viewers, yet some of them don’t, but they still have an impact on the audience.

I have so many favorite characters from the game, but I will list my top three for both male and female… 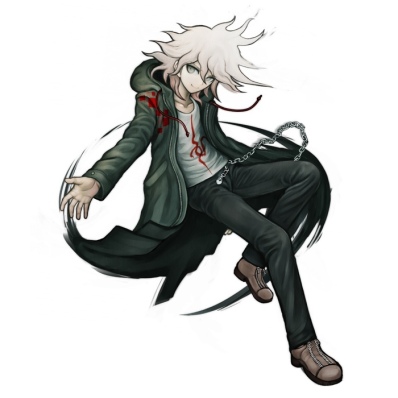 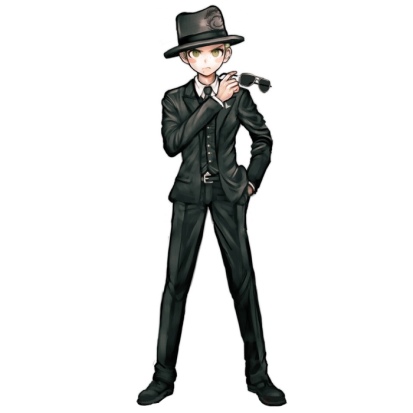 Now for my favorite female characters (I had such a hard time choosing three of my favorites because I loved most of them!)… 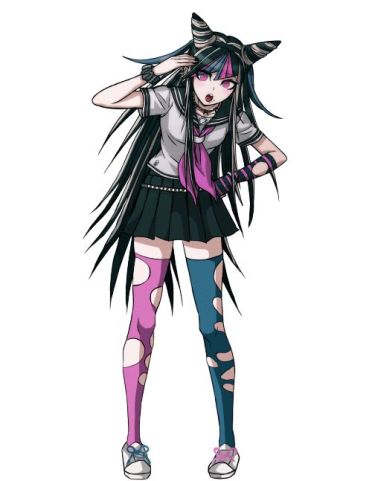 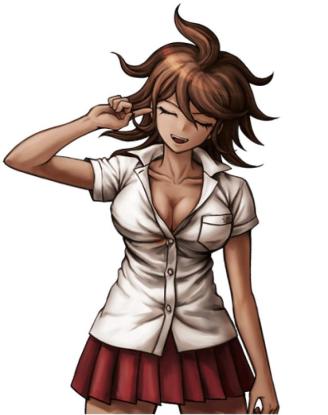 While the art and animation seems simple for a game, the character designs are very detailed and reveal characteristics of who the person is. These designs and sprites for the characters seem to have the same visuals as a normal anime character, which make the game more interesting. For the murders and excecutions, the blood still remains bright pink, making the visuals even more eye-catching! When watching the first season, I didn’t enjoy seeing the different colored blood, but I got used to it after seeing more of it. Also, during the class trials when the room starts spinning around, the backs of the characters are just pitch black, with no design to them. I didn’t seem to mind, but I saw a lot of that after the third trial, and it kind of agitated me.

For some of the important scenes in the game, the designs seem more unique and life-like, in a way. The characters seemed to be digitally painted in these scenes, making some of them look different. Some of the time, they look quite remarkable, but then there are times where the painting looks somewhat lazily made.

Good games, especially ones in the mystery genre, need wonderful soundtracks, right? Well, if you have not seen or played the game, you are in luck! In this murder mystery game, the players and viewers will listen to various genres of music depending on each scene. A few of the are played repeatedly, but they are quite amazing! Composed by Masafumi Takada, fans will hear different genres of music thrown into the game. From rock, to techno, to jazz, and even sentimental pieces, this game has the music needed to leave the fans wanting to download them and listen to the tracks repeatedly. Gamers, you are in luck: you can download these soundtracks from the game for free!

Since this was my first time watching a Japanese gameplay, I tried listening to the English Sub version, but I didn’t like it that much. A few of the voices did not seem to fit the characters well and the articulation for the dialogue was not right…so I watched it in English Dub. Thank goodness I found the Dubbed version of this game; it was such a pleasure listening and hearing familiar voice actors playing the characters. Some voice actors from the first game and anime series, such as Bryce Papenbrook. He plays one of my favorite male characters in the series, Nagito Komaeda…and I didn’t even know it was him! His voice was so different than his previous role for Makoto Naegi in both the first game and series, and much deeper as well! In addition to hearing Papenbrook, fans will be able to recognize Johnny Young Bosh (Hajime Hinata), Todd Haberkorn (Teruteru), Wendee Lee (Akane Owari), Stephane Sheh (Mikan Tsumiki), and a few more.

For a video game, I really enjoyed watching it and being somewhat a part of the class trials. I never would have thought I would be entertained by such a game, because I rarely even play video games anymore. Now, I think I may have to go back to gaming and watching gameplays on YouTube more often. Because I enjoyed it so much, I am giving it a perfect score of five out of five stars! Compared to the first series, I really love this game because I got to spend time getting to know each individual character more than I did in the anime. When and if I have the time, I may go back and watch the first game to see if I like it better than the first season. The Danganronpa franchise just keeps getting better as I get further into the games and the fandom. I hope this game keeps bringing more surprises to the fans in the third season of the anime (currently watching it and really enjoying it) and the third game, which I may buy once an English version is released.

(I will totally recommend this franchise to pretty much anyone over the age of fourteen who can handle a lot of blood and gore and have the patience of going through the long dialogues and monologues! Also, if you are reading this review and have never seen the games nor series, it would be helpful to go back to watch the first game or season of the anime to understand the second game.)