Well…words can’t describe how happy and relieved I am now that I am done with studying for my three of my big final exams: Algebra 2 EOC, AP Language, and U.S. History EOC.  During this past month, I have been studying (of course), watching some TV and anime, and definitely reading some books.

Now that the exams are done and over with, I can now go back to posting more reviews on my blog! But first…I will tell you readers what I have been watching and reading during the time I was not posting…

Synopsis:  After the death of their mother, brothers Edward and Alphonse Elric decide to bring her back using a type of alchemy called Human Transmutation; however, this alchemy happens to be taboo and it is impossible to use it correctly.  During this process, Al’s body is completely gone and Ed loses his left leg.  To bring Al back to the real world, Ed sacrifices his right arm for his brother’s soul and houses it in a huge suit of armor.  After this incident, Ed receives prosthetic auto-mails for his arm and leg.  In addition, he becomes a state Alchemist and is named the “FullMetal Alchemist.”  Together, the Elric brothers begin their quest to find the Philosopher’s Stone to bring their mother and Al’s body back.

Now, I started watching this anime before my huge studying period, but I kind of had to stop while studying for the Algebra 2 EOC. I was only able to watch one to two episodes per week, which was so hard  because it’s so amazing and spectacular! Last weekend, though, I viewed six amazing episodes!   I am almost done with the series, so I will post my review sometime between Friday and Sunday.  Gosh, I really love this anime so far!

Synopsis: It has the same premise of season one, but it has different characters and the story is mainly set on a deserted island.

Right after finishing the first season, I immediately went to YouTube to find the gameplays for the second game.  I only got to watch the first part of the game because of my studying, but I am now able to go back and watch the rest of it!  So far, it seems really interesting and I definitely can’t wait to see more!

Synopsis: “For Andi Mack’s thirteenth birthday, her older sister Bex comes to visit her and her parents.  Andi works through her teenage life, with the help of her strict parents…and her friends Cyrus and Buffy, including with dealing with the fact that Bex is actually her mother and that her mother, Celia is actually her grandmother, and managing her crush on classmate Jonah Beck.”  Resource from the Andi Mack Wikipedia page.

Yes, I still watch Disney channel, but not as often as I used to.  After Good Luck Charlie ended a few years, I stopped paying attention to the channel because none of the shows were that interesting.  After watching Backstage (I really hope a new season airs for this Disney drama because I really enjoyed it) this last year and now viewing this new Disney series, I may go back to watching this series. (I will post a review of this TV show after the first season ends)  Andi Mack has brought a whole new light for Disney and more potential for the channel to become great and enjoyable again!  I definitely recommend it to everyone who love Disney and a good middle-school/family drama.

4) The New Episodes of Attack on Titan Season 2

Synopsis: After discovering the fact that titans are living inside the ginormous walls, Eren and the rest of the cadets are out to figure out the mystery of these creatures staying in the walls.  In addition, the gang finds other shocking discoveries about the titans and mysteries about a few of the people in the 104th squad.

In the anime community, a lot of fans have been talking non-stop about the new season of Attack on Titan, and I don’t blame them!  I have actually been speaking of it non-stop to my friends at school.  Every Saturday, I have been viewing these new episodic gems and I am left wanting more each time!  For those of you who have been waiting to watch Season Two, I would watch it now.  I think you are going to like it as much as the first season.  (My review for the second season will be posted after the twelfth episode.)

Books I have read

Every Day by David Levithan

Synopsis: “Every Day is about the story of a person who goes by A. Every day, A wakes up in a different body, living in whatever body they wake up in for the day…The story begins as a day just like any other, with A waking up in the body of a teenage boy named Justin. Upon arriving to school, A meets Justin’s girlfriend Rhiannon and feels an instant connection to her. Based on memories A can tap into from Justin’s brain, A can tell that Justin and Rhiannon are having a rough time in their relationship, so in order to learn more about her, A invites her going to the beach. The pair head off and enjoy a beautiful day of relaxation as well as share a conversation in which they open up to each other, though A’s sharing is limited and very carefully worded. A had never felt such a connection with anyone before so they begin to wonder about how they can make themselves stay, whether in Justin’s body or another body, as long as they get to be with Rhiannon.”  Resource from the Every Day Wikipedia page.

Before studying for my exams, I was in the middle of reading this novel.  I actually ended up finishing it after my Algebra 2 EOC was taken…and did I enjoy it?  Well, I will post my review on it sometime before Friday to give you readers my answer.

Islands in the Stream by Ernest Hemingway 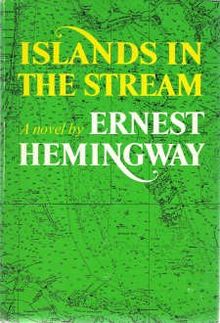 Synopsis: “The novel is divided into three separate books, held together mainly by the character of Thomas Hudson. Part 1, “Bimini,” is the longest and most successful of the three. Little happens: Hudson, a painter “respected both in Europe and in his own country,” works; his three sons from two earlier marriages (his third wife never appears) arrive for a summer vacation; they all swim and fish. The descriptions are often rich, the scenes humorous, and the focus is on feelings, particularly on Hudson’s largely unexpressed love for his sons: “He had been able to replace almost everything except the children with work and the steady working life he had built on the island.”  From the Islands in the Stream eNotes page.

Lately, I have been getting back to reading more classic novels because I am going to have to start reading them a lot next year for AP Literature.  Right now, I am still trying to get used to reading older novels, but this book is really interesting from what I’ve read so far.

Synopsis: In this Hemingway novel, the author writes about the angst of post-World War I generation and introduces two unforgettable characters: Jake Barnes and Lady Brett Ashley.  These two characters explore Spain as they also journey through an age of moral bankruptcy, spiritual dissolution, vanishing allusions and unacquainted love.

I know, I’m reading another Hemingway book, but that’s because my AP Language assigned this novel as one of the novels my class could read for the end of the year.  I started reading it today and I am really enjoying it so far.  Hemingway’s stories are just so engrossing and entertaining to read, especially after reading The Old Man and the Sea two years ago.

Oh!  I have news for all of you who like reading stories and fanfictions: I made a quotev account and decided to start posting an Attack on Titan story I’ve been working on since last year!  So far, I have posted nine chapters and other people on that site seem to really like it!  Here is the link to my Attack on Titan fanfiction Hope for Humanity!  If you guys want to read it, you can read it on quotev and/or what I may end up doing is post the chapters I have on there and bring them here to my blog so that all of you can read it!  If you guys like that idea, let me know in the comments!

In addition, I’d like to make an announcement: I am almost to fifty followers for this blog!  Ah, I am so thankful to all of you followers who have read, liked, and commented on my reviews.  It means a lot to me that other people like to read the posts I have online!  Thank you all so much for supporting me and GeekyGirlWrites!

This past month has been so crazy and filled with studying, and I am so glad I can have a break from studying for right now.  I am also glad I can bring more reviews to my blog, watch more TV, and read more of the books I’ve been waiting to read!

I hope you all enjoyed this post and have a good night!